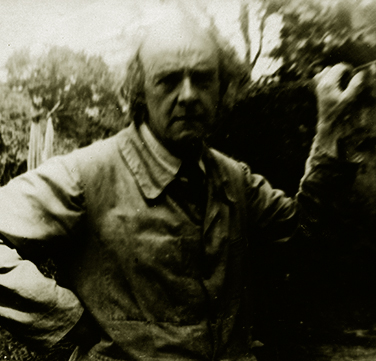 Vermeulen started his Third Symphony on 26 March 1921 in his little composing house in the woods of Hollandsche Rading and completed it on 9 September 1922 in La Celle-St. Cloud.
The title is derived from classical Greek concepts. Thrène (threnos) means lament and péan (paian) war song or song of victory. In the slow movements of his composition Vermeulen had intended "to sing to love's transcience"; the fast movement is meant as a "song of joy to sing in love's presence". Vermeulen added in an explanatory note: "The same desire, or the same happiness, in multiple intonations, can be in tune with each other."
The work has a completely different form to the five movement Second Symphony. Due to the prevalence of a Lento motion, darker instrumentation and the presence of bigger, longer drawn-out phrasing for built up climaxes, the Third Symphony has a much more dramatic undercurrent. It consists of an introduction and three movements (A – B – A': slow – fast – slow) continuous without a break, which form a tight group, thanks to the return of thematic material.
The prominent opening – a signal-like melody over a six note chord built up from the low registers of the orchestra by various groups of instruments – is strongly reminiscent of the first bars of Varèse's Arcana, a work which was created some years after Vermeulen's Third Symphony. (For that matter, this is the only similarity.) The theme which is built up from large intervals, called 'evocation' by Vermeulen, returns several times during the work as a beacon and point of recognition giving the form clear contours. After some five other melodies which evoke calmness and a subdued mood, the real Thrène song enters: in a succession of polymelodic voice-weaving within which four segments can be distinguished. While the first two have a static character of restful contemplation, the others move on more. Canon technique plays an important part in the build up to the climax in both the third and the fourth segment. By gradually shortening the distance between the voice entries in the last segment, tension is increased. Other factors contribute to the effect of the climax, such as replacing a calm background (a stationary harmonic field) with a steady changing of chords and the use of ostinato basses (both procedures often used by Vermeulen). Also new voices are added to the gradual crescendo. The tension of the ever fuller, finally eight part texture, which includes all the instruments, is released in the allegro of the Péan.
The song of joy can be regarded as a rondo with two refrains whose plots can be summarized as follows. Refrain 1, auspicious in rhythm and colour, appears five times, alternating between medium and high tessitura. The signal motif of the evocation which follows, functions as a sort of exclamation mark. In the following lyrical, poly-melodic section, in which variants of the refrain are hidden, three parts expand to seven parts, pronouncing a renewed acquaintance with refrain 1, this time over a pedal point and with new counterpoint. This fortissimo section makes way for a harmonic background over which the glockenspiel and solo violin together begin a new song, supported by yet other melodies. This crescendoing passage leads to the third appearance of refrain 1 and Vermeulen develops this for a while. Then all voices throw themselves into refrain II, a Bacchanalian theme in which the melodic path is difficult to trace as it consists of two 'tracks' with differing harmonies.
Then, twice in rapid succession and in an extremely high tessitura – possibly as a kind of memento mori – the signal motif appears over a pounding cluster in the low strings, against which other instruments also blast their motifs. As a reaction to this, the atmosphere suddenly changes and fragments of the elegiac song of the Thrène return in a slower tempo. After a while the main motion of the allegro is restored in a round dance with virtuosic melodies. With the second appearance of refrain II, the fast movement culminates in a huge climax, which suddenly breaks off after three appearances of the signal melody. (According to Vermeulen the movement can be graphically described by a rising zig-zag line which, at its climax, would fall straight down.) Then the first melodies of the Thrène appear again, over a slow ostinato movement with the violet colour of timpani, harp and pizzicato strings sounding in a dying out diminuendo – like the sound of a solemn funeral cortège disappearing on the horizon.
The memory of how he had written the end remained years later clear in Vermeulen's mind: "in spite of myself, contrary to what I wanted, but forced by a necessity which I could not escape".