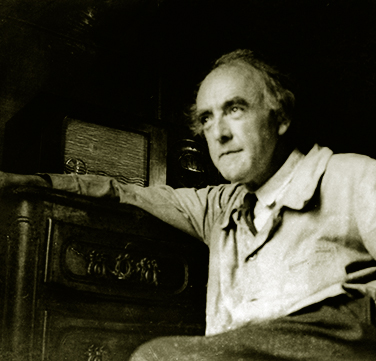 Matthijs Vermeulen was 24 years old when he began to write his first symphony. In the summer of 1912 he went to Eijsden in South Limburg, where he rented a room in a farm, in order to be able to compose in seclusion. It is known that while he was there he put the proud opening theme on paper and several fragments of other movements. Back in Amsterdam, involved in his work as a reviewer, he made less progress than he had hoped. The next summer he returned to Limburg. This time he stayed in Geulle and in Gulpen where, according to preserved letters, inspiration streamed profusely to him. He completed the work in 1914.
The symphony is made up of six continuous movements, within which segments often quickly change mood. It contains an overflow of melodies of an optimistic and sunny character. Some are reminiscent of Diepenbrock (especially those in a high tessitura in the strings, with fast embellishments) and one of Mahler (a simple, scherzo-like tune in the third movement which is treated canonically in the woodwind), but most are unmistakably his own. Modality plays an important part in the melodic construction. The opening theme, for example, based on the interval of a rising perfect fifth, is Mixolydian. Also the Dorian, Phrygian and Lydian modes occur and these give great diversity to the melodic structure. The youthful zest that the symphony generates is partly created by the rising line of several melodies and the varied, often driving rhythm. Vermeulen's feeling for form can be seen in the return of the opening theme towards the end of the symphony, which is rounded off with a transformation of previously heard material (accompanied here by a pedal point in both high and low registers of the orchestra).
The work can certainly still be called tonal, but Vermeulen has left traditional harmony far behind him: normal cadences are rarely found in this opus. The harmonies which result from the interweaving of two to six independent melodies, as well as the free handling of the part-writing, repeatedly deliver complex chords which in general are mild and sonorous due to the way they are spread over the sound spectrum of the orchestra. As far as the harmony is concerned, one passage can definitely be called renovative: the section before the reprise of the main theme, where melodic fragments in no specific key float above a mysterious sounding series of chords, and where the flute sings as a nightingale.
Vermeulen was undoubtedly influenced by the great masters he could listen to in the Concertgebouw. The rising minor ninth with which the solo viola begins the slow second movement, was possibly inspired by the main motif of the Adagio theme from Bruckner's Ninth Symphony, a work which Vermeulen had heard in March 1912 in a performance conducted by Evert Cornelis and which had moved him greatly. The fanfare by four trumpets, which, with a signal-like melody in parallel augmented triads, introduces the fourth movement, evokes Debussy, and especially Fêtes. The accompanying, soft background rustle of several percussion instruments, which continues in the Alla marcia is also reminiscent of the Frenchman, but there the comparison ends. Vermeulen developed from the beginning a personal style and technique: the polymelodic. Also in the realm of orchestration, Vermeulen's firstling already shows the hand of a master; the colouring is of enormous diversity.
Years later, looking back in retrospect at his work, he gave this characterisation: "The first is still on the border between the nineteenth and twentieth centuries, before the big shadow fell, and because it mainly expresses the enchanted expectations of the dawn of youth, I named it Symphonia Carminum, symphony of songs, carmen meaning both song and incantation."