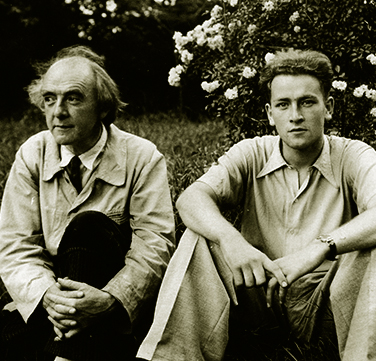 Vermeulen's Notes for the premiere on 2 April 1967:
"I am not using the word "dithyramb" as the literary term of the ancient Greeks, but in the widest sense as any song of joy of any form and intonation, such as profane, sacral, lyrical, phrenetic, wild, gentle, enthusiastic and in ever gradation thereof, including the playful.
I could not say how this idea could occur to me in the most perilous of all epochs.It was perhaps through the unconscious desires, which always remain unexpressed, of millions and millions of my fellow-beings whose joint wish condenses to a sphere of vibration with which one could have contact by unknown means.
The place of action of the Seventh Symphony is a traditional podium which the listener can, at will, imagine as an ancient open-air theatre, a spectacular historical square with good acoustic properties where various pieces of music join together for the celebration of a festival. It could in fact take place in this way. A group constantly steps out from the orchestra, plays its part which can have very varying dimensions, returns again and is followed by another. The groups are sometimes contrasting, sometimes supplement one another, are sometimes rousing, sometimes tempering, always in keeping with the psychology of the circumstances which changes very often, but which can, from the beginning, be characterized as a striving of one-ness to many-ness, to the generality which comes about at the end. The Seventh Symphony has about forty such episodes, not counting those which differ merely by a nuance.
The basis of the construction of the Seventh Symphony, just as of my previous works, is the cantus firmus. Placed on paper, that melodic line resembles an immense solo, moving in all positions, from the highest to the lowest, and it serves me as an architectonic plan. No-one, apart from me, can read or understand it and perceive the many riddles it contains, let alone elucidate them. I always know precisely where I am and whither I am going. The directions, the various tensions, the rises, the falls, the rousing of energy, the train of thought, the nature of the feelings, every section of the action, the speeds and the rhythms must beforehand be anticipated with the greatest possible accuracy and be calculated. During the working out of the plan those factors always remain under control and, on this condition alone, can one be assured that the intended results (the highest pleasure which desires eternity) will be achieved without stumbling. I needed this psychological organized, thematic-melodic guiding principle from the time of my first compositions, since not one of the solutions was able to satisfy me, which at the time (around 1910) rose up in all corners of Europe in the face of the evident bankruptcy for which the predominating styles provided the undeniable proof that not one of them could in future serve as a working method for a fruitful, life-giving technique. I considered I could notice a similarity between my ideas concerning a possible musical architecture and the cantus firmus, which the composers of the Middle Ages had used for four centuries as a basis for their compositions and which had fallen completely into oblivion since the appearance of the general bass, its autocratic successor. My opinion differed in one essential point from that of the so-called contrapuntalists. They always chose a folksong or a well-known hymn as a cantus firmus, while mine was of my own invention and arose from inner hearing, what used to be called inspiration. It was also thoroughly modernised in many other respects.
The cantus firmus has the inestimable privilege as a method of musical construction of never acting as a determining factor of the "harmony". It follows in fact from this that each of the participating notes acquires an opportunity for an individual shape and personal freedom. It is no longer the composer who allots a harmony to a note, a chord, it is likewise no longer the tonal relationships which impose a chord upon the note, it is, on the other hand, the note itself which forms the chord in which it is to appear.
The consequence of this reversal of roles is just as far-reaching as the previous one. It cannot but sound that all tonal relationships automatically cease to exist with the framework of the scale. The tonal commitments, which were referred to as "tonal functions", cease to exist. A scale is henceforth a series of twelve unconnected notes. The sign for raising and lowering notes (sharp and flat signs) will, no doubt, continue to be used for a very long time in musical notation, but they have lost their former interpretation. Chromaticism, which was based thereon, disappears. Every note is free in itself and not dependent upon any other. A fourth consequence implies that a completely new combination of voices can develop spontaneously around the cantus firmus, and this I have called polymelody. This finally brings, as the last surprise, a complete transformation of the rhythm. Even the instrumental colour appears to have undergone a metamorphosis as well.
The preliminary and unavoidable condition for the success of these reforms, which open up fabulous perspectives for music without affecting its historical nature, is, according to my conviction, the restoration of melody to its prerogatives with which all composers have distinguished it from its origin until the beginning of our century."